Anthony Planakis – NYC Bees: A Day in the Life

Stories and images of the various jobs that Tony responded to over his years with the NYPD.

He will also share his favorite beekeeping tips, tricks, equipment modifications, and things he learned through the years of watching and working with bees. 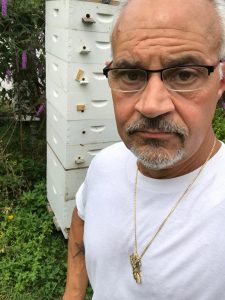 May 25, 2021 Sam Comfort - The Good, The Bad, and the Bugly: Recent efforts to simplify a complex bee world

CANCELED: March 31, 2020 Dan Conlon: Looking for Queens in all the Right Places

CANCELED: July 28, 2020 Dan Conlon: Looking for Queens in all the Right Places

November 19, 2019 (was November 26) Larry Connor: The Increase Nucleus as Support Hive in the Backyard Apiary and the Bee Breeding Program

September 25, 2018 Richard Cowles: The Queen of Your Dreams

May 23, 2017 Christina Grozinger: Partnering with beekeepers

April 28, 2015 Sam Droege on The Glorious Diversity of Other Bees.