Michael has been an avid beekeeper for about 15 years.  He is currently a BYBA Board Member and serves on the Programming Committee as well as being Chairperson of the Bee Yard.  He participates with others in teaching numerous classes, including NewBee Fundamentals, Bee School & the WannaBees.  He is a frequent contributor to the BYBA Bee-Mail Newsletter and used to help run the Bee Yard back when it was known as the Queen Rearing Project.  In this role, he taught queen-rearing classes, built the mating nucs, and once put a snake into a garbage can.  When new people showed up, he would say, ‘Can you believe what people left behind?’ Mid-class, the snake shot out of the can!  A good time was had by all!

This is what Michael had to say about how he got into beekeeping:

My bee experience started when a coworker suggested I should get bees. At the time, I had a huge organic garden. Most of the plants I started from seed, many of which I saved and selected. Some stock I kept going for years. Massive garlic with cloves almost the size of golf balls, hoping to make garlic chips instead of potato chips, (the healthy alternative). I was also working on a small apple orchard after I found out my neighbor had 100+-year-old apple trees, and bees would fit right in!

So, Lou talked me into going to a Back Yard Beekeepers Association meeting. (2000/2001?) The scientist speaker came from Brazil and she talked about something and shaking powdered sugar in a jar. I don’t remember, but it must have been about mites and treatments, and that could explain why I lost interest.

Years later, I found a bee book at a used bookstore, 1950’s ABC-XYZ of beekeeping, and another, Shining Hours, translated from French, brought out the curiosities of the honey bee. So I started going to meetings.  After hearing Mike Palmer’s talk about overwintering nucs (SNEBA2006?) I was hooked!  I ordered a nuc to copy because I’m going to make a fortune!  Then, I ordered bees. 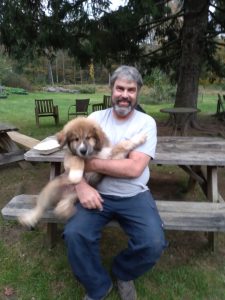