Sunday, January something.  The weather report here in Connecticut looks as if bees may fly today. It’s been about 4 weeks since the last flight. As the temperature climbs into the low forties’ bees start checking out the entrance. While getting warmed by the sun a bee takes to the air and jettisons her waste. The nice white snow becomes stained with yellow dots. Once the cleansing flights are over and temperatures become navigable, forage may start. It’s winter what could the bees find?

If the bees started raising brood, they may need water for their brood food. The water from melting snow on the landing board, or a predetermined water source from previous trips.  Perhaps witch hazel or skunk cabbage are blooming. Maybe tree resins for propolis production. Bees might check out bird feeders and bring home the dust that collects on them. The broken maple branch dripping sap will be found. The flights and available forage increase ever so slightly and it’s a hit or miss lifestyle till early/mid-March. By mid-March, there are usually more blooms than the bees can get to. Colonies are still small and flight is limited by temperature, but the hives are growing in size.

By April, drone cells are capped and flight is very consistent, more food means more brood and more bees! Swarm season is on the way. I think of April 15 Tax Day, as the start of swarm season here in CT. I like to look for signs of swarming in the hives, instead of seeing it in the trees. With all this brood, bees need to find forage, to stay ahead and have some for a rainy day! April is also the start of package season! Packages continue through May and sometimes into June. May and June are nuc season. With all that’s in bloom during April and May, it’s a great time to start beekeeping. The bloom continues till the end of June. Then 3 weeks or so of dearth followed by a massive fall flow. Asters are the last of the major forage option in late September and October.

What if, we get a rainy day or two. The bees stay inside and do housework! I think of this as a micro dearth!

If the short dearth is more than a couple of days to maybe a week or so, I think of it as a macro dearth. These can be troublesome in the spring! Let’s say a front comes through and the temperature drops and stays below flying temps. The bees are confined and use up resources, if there is a lot of brood, the resources could get used up and the bees starve. DEAD BEES!

As an early May cold snap starts, the frost could take out the apple blossoms and damage the Russian/Autumn Olive flowers. These combined will take weeks out of the early May honey flow. The temperature rises to just enough to allow bees to fly. With 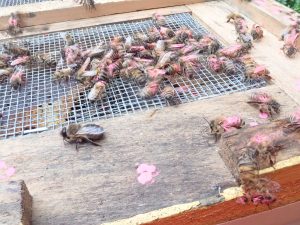 flight and no forage, the bees will look for food. Soda cans in the recycle bin, sugary trash, or candy in a candy dish at the lawnmower shop next door. Food will be found.

Towards the end of the summer dearth, July 2018, I noticed one of my mating nucs was very active! Next to it was a Bi-hive with bees checking out the inner cover. So, I ran to the house and got my vacuum to suck up the robbers, hoping to get them before they went home to recruit more sisters. “No,” I thought, “I’ll mark them instead!” So, I ran and got a queen marker and started dabbing bees.

Once the bees were marked, I was hoping to see where they went. I went and closed off my bigger hives. 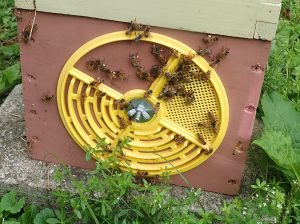 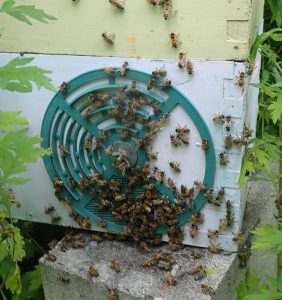 Before I got to one hive to close it off, I saw marked bees. 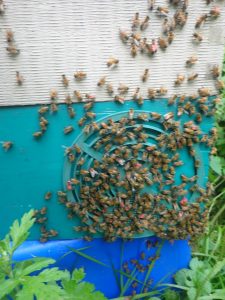 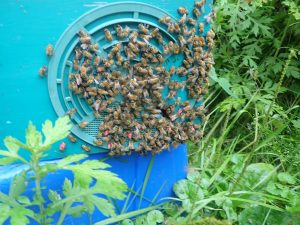 So my highly productive hive, even in the dearth, appears to house my best robbers! What other hives was it robbing from?

My robber hive would be prized for its productivity in the ‘honey at any cost ‘ beekeeping world. Is my backyard, a model for a neighborhood?

The players in my neighborhood model:

The robber hive represents the established beekeeper with many large hives. I’ll call them “Treaders,” a compound word for people that rely on excessive feeding and treating to keep bees strong.

The nucs being robbed out represent smaller operations, including new beekeepers, I’ll call them “beekeepers.”

Treaders want big booming hives for the honey flows. Come flying weather, these hives are huge, ready to pollinate and gather nectar. Raising an amazing amount of brood in double deep ten frame equipment.  I can imagine a bee yard with 10 hives with 45000 plus bees in each.

Treaders feed late winter and then in early spring to promote brood rearing of bees and mites. They use swarm control and repress the bee’s natural instinct to cleanse themselves by the swarm. They use a stock that outperforms others in the neighborhood, meaning forage. That includes robbing. Then they propagate the robbing genetics. They treat when mite loads get high and blame the natural beekeeper for mite bombs. The treaders also force their bees to live in large cavities that, rarely exist in nature, thus creating the miticideosaurus.

A Suburban town in Fairfield county Connecticut, one of the last remaining family farms is also home to beekeeping. This treader is very fond of this location, it produces large crops of honey, even when other beekeepers seem to fail.  In July the mite count can soar to over 15% but this can be taken care of with a treatment. And at times the bees may need a little food to help them get through winter, then a little more in spring so they will be big for the honey flow. Maybe another treatment, a couple more gallons of food, and maybe a pollen substitute.

A few blocks away is a newly inspired beekeeper (A), who went to bee school and was off to a good start. The hives took off and looked great. Plenty of brood with new wax built out, just like the class presentation. But in July the hive slowed and then seemed to self-destruct!

Another neighbor beekeeper (B) does his mite counts and treats when needed, but still loses the majority of his hives. One year his bees got so nasty his wife was ready to throw him and his bees out. You couldn’t walk out the screen door from his porch without bees in your face, then often a sting.

Yet another beekeeper (C) finds dead bees in front of his hive and suspects robbing. He also notices he has a ton of bees under the screen bottom board.

Beekeeper (D) comes back from a 2-week vacation and finds 2 suppers worth of honey missing?

Beekeepers A-D have experienced observable results of robbing! Usually, the robbing starts in July during the summer dearth but could start earlier with a macro dearth. The robbing could go on until the hives crash, with symptoms similar to EFB or AFB or till, the end of flying season in late October or November.

Beekeeper (A) installed a package in late May and it built out quite well but was not strong enough to fight back the pressure of the treader’s massive colonies. Beekeeper (A) also went to a bee yard and noticed no entrance reducers, and took his out so the bees could load up the hive faster, which also gave easy access to the robbers.

Beekeeper (B): I thought it was rare for a beekeeper that counted mites and took appropriate measures to lose colonies. But the question has appeared in a bee magazine and seems to be very common. Bees die for many reasons, but when you add in bees getting nasty, and a treader a few blocks away, robbing could answer both questions. ‘Why did my bees get nasty?’ And,  ‘I treated. Why did my bees die?’

Beekeeper (C) went out to peek at his bees and saw some dead bees. Perhaps, he lifts the back of the hive, feels no weight and concludes robbing. While lifting the back, he notices a large volume of bees under the hive’s screen bottom board. The dead bees may have been the start of combative robbing.  After a while, the robbers were able to convince the bees inside to feed the bees outside through the screen by means of trophallaxis. Did the robbers move in, or did the house bees start feeding the robbers that begged for food? Not sure? Feeding through the screen is a process known by package producers. Even when the queen cage has no candy or attendants, the queen can still survive in the package.

Beekeeper (D) Went on a summer vacation and came back to a hive without any honey left. This beekeeper should have closed the upper entrance and put the reducer to the smallest opening before leaving.

For Connecticut, a dearth will happen sometime around July and can vary a week or two depending on the weather. The summer dearth or any macro dearth can be the cause of all kinds of mishaps in the bee yard. Connecticut was never known as a high honey production state so things can go bad real fast.

Beekeepers A-D are beekeepers I have known or read about on Facebook. Any beekeeping club will have stories that are similar.

Are treaders responsible for destroying the feral bee populations?

Is the treader’s method of keeping bees with large populations, a breeding ground for mites? And instead of looking at their own beekeeping practices, it’s easier to blame the natural beekeeper for making mite bombs.

Are treaders responsible for so many beekeepers leaving beekeeping?

Is the treader’s insistence on large hives that rob, the reason why 40% of honey samples fail out of Apimondia’s 2019 honey show?

Are treaders selling honey contaminated with sugar and mite treatments that their bees robbed from other beekeepers?

Beekeepers feed their bees for winter to no avail, then the hive gets packed with winter stores.  Does this correspond to bees not flying because of cold temperatures, thus no robbing?

Do treaders hives have an accumulative high mite load because they rob from so many hives with low mite loads?