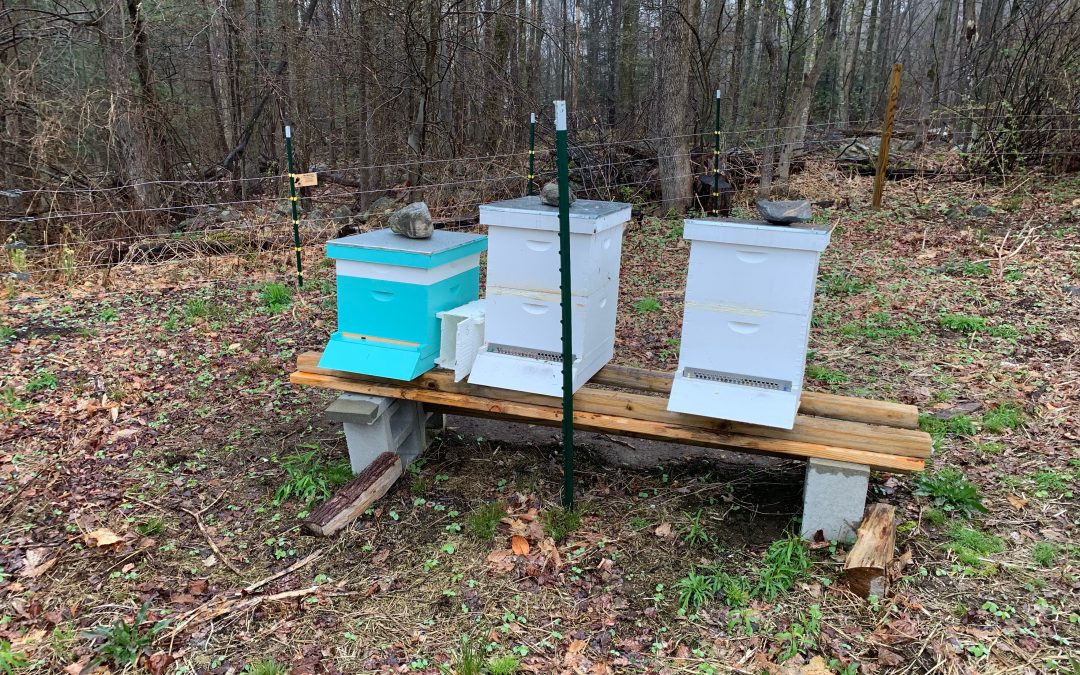 BH(Ben Haase): Yes, my wife and I are just pulling into the driveway, so you may hear some background noise, but now’s fine!

TW:  Great.  I’ll just jump right in, then!  What initially got you into beekeeping?

BH: Well, originally, it was a project with my father. I bought my father hives for his garden and we put them together.  That got the ball rolling.

TW: When was that?

BH: About four years ago.  We started with two hives.  Friends had mentioned that this might work better in case something happened to the first, we could steal resources from the second.  We bought stuff from bee-commerce and ordered two types of bees, Italians and Carniolans.  They were put in a whole fenced in yard at dad’s house in the Winstead/Winchester area.

TW:  That area’s a lot more rural than where I live in Fairfield.  Have you had trouble with bears?

BH:  The bird feeder got attacked one year.  We put in hardcore fencing after that – well, posts with electric fencing.  It looks nice, sort of a 20×20 area and that has kept the predators away.

TW:  It seems like your family is very supportive…

BH: Courtney [Ben’s wife] helps a lot and is getting used to being around lots of bees at once.  Dad comes out and Mom likes to help from the kitchen.  She makes syrup and fondant for them.

TW: Courtney can hear us, right?  Hey, Courtney, have you ever been stung?

TW: My boyfriend takes pictures, but he’s never been stung.  He calls himself the bee whisperer and insists that they like him better.  I’m sure they do since I move around their furniture.  I’m pretty close to my neighbors here.  Have they been curious or have you had any negative feedback?

BH: No trouble with the neighbors.  One has had some bees in their pool, but I don’t think it’s bothered them.  We do the neighborly thing and give them honey each year.

TW:  I’m sure that smooths over a few pool bees! How many hives do you have now?

BH: We’ve been running three hives for the last few years.  We have one Carniolan, an Italian, and a Saskatraz.  I started a nuc that we can kind of use like a hospital – move around frames and honey when necessary.

TW: Have you ever lost a colony?  I’m terrified of that.

BH: Yes, the Saskatraz, a few years ago. It was a winter loss in a nuc housing and it tipped over and froze out.  Dad doesn’t get out there all the time and I don’t drive out much during the week.

TW: What is the most rewarding thing about beekeeping for you?

BH: Honey production is really cool – life cycle observation, the process from capped brood to larva…watching the bees do their magic in making their own queen.  All of a sudden, the nuc has taken off and gotten too big for their own britches and I have to give them more room.

TW: What’s your take-away from the first few years?

BH: There are beekeepers and there are bee-havers and you will find your place.  You may bounce between being a keeper and a haver.  For instance, I got married last year and was busy.  I saw the bees when I had to, but definitely less than other years.  Your role is to check and make sure that they are active and healthy, but they will be happy regardless of what role you fill that year.

TW: How long have you been a BYBA member?

BH: Since day one or a bit before – we are friends with board members.

TW: How has membership helped you?

BH: Going to meetings has been super informative.  In general meetings you can collect information and hear about other ways of doing things. You learn that there is a right way, a wrong way, and lots of different ways out there.  Special topics and Newbees are great to just listen even if you don’t want to ask questions.  It helps you connect to other keepers.

TW: Did you have a BYBA mentor?

BH:  Well, it wasn’t officially through the BYBA.  My boss’s wife came and helped me hive my first two packages. I learned by going to her house a few times and helping with her hives, too.

TW: What made you want to get involved in leadership?

BH: Andrea Azarm tapped me on the shoulder – probably the end of my first year – looking for new folks on the board with new ideas.  She convinced me to throw my name in the hat and get elected to be a regular board member.  I did that for 2-3 years and as Rick was ending his three year tenure, I stepped in.  There were things that I wanted to help change and refine.

TW: How do you see the club developing or changing over the next few years?

BH: The first thing is that I’d like to clean up communication. Covid shook the way that we did things.  Usually, things happened at meetings and in person.  We need to strengthen the newsletter and get stuff out to the membership in a timely fashion – maybe more through social media sometimes.  We just need to revamp how we do things and have more creative ways for us to get together.  Not just for education, but also for connections.  Regardless of the bees, we should be friends!

TW: I love that Ben.  That’s one of the reasons why I joined.  I’m new to the area and wanted to get to know people with similar interests.  Its been great for that, so far!  Let’s wrap up!  What would you like to tell the newbees, like me?

BH:  Don’t be afraid of getting in the bees way and hurting them.  They know how to be bees and will take care of themselves to the best of their ability with all of the nature that is around them.  They will adjust and muddle through regardless of what we are doing for them.  As long as you aren’t tipping over the hives!