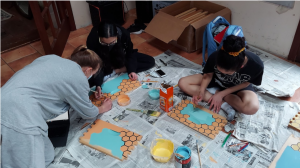 Jeff… beekeeper, mentor, friend…and an educator, what I might even call an ex-hippie…but most importantly a friend.

I still remember my mom’s first years in beekeeping. She was pretty clueless but had made friends with lots of interesting people. Her key 3 were, Ed Weiss, who sold us all the equipment and got us started, Dick Marron, who let us learn from him over at Cherry Grove Farm, which was 1/2 a mile from our house and Jeff, who was always willing to help out, even when the bees were a little intense.

I remember one time Jeff came over to help with a grumpy group of bees and after one stung him, he ate her. WHAT? Why would he eat her? He explained that it didn’t make sense to waste a life. That was the funny thing about Jeff, he could be very matter-of-fact. It was so logical for him to eat a bee so that we got the most out of that life. Of course, after seeing this man, with a long silver braid down his back, eating a bee, we all wanted to try it and that night there were lots of questions about why would you eat it and could we try? A week later as mom was catching a swarm, Teddy said if you get stung, can I eat the bee? Fortunately for Teddy, he got his chance to eat one. His response was crunchy but sweet and nutty. I think swarm bees might be sweeter because their crop bellies are full! My dad was next in line, how could his son do something he hadn’t. He agreed, sweet and nutty like an almond. Now it was my turn…being only 7 I thought this was a little gross but if dad and Teddy tried, I should try, right? After a few crunches of the exoskeleton, I had to spit it out. I wasn’t ready for this yet!

Bailey and Abi from my troop helping with the bees for the first time.

As I continued to grow and learn about bees, I always enjoyed seeing Miss Nancy and Jeff, and sometimes Miss Leslie, at town events teaching the world about bees. Jeff would bring his observation hive. I loved watching the bees but just as interesting sometimes was watching all of the people come up fascinated by this little bee community. My own interest grew as I learned more watching Jeff, my mom and eventually becoming part of the Wannabees.

I still remember extracting honey with Mr. Kreitler. I was so excited that we got to take a whole jar of honey. To Keep.

As I learned and met many of the people in the beekeeping community, I, too, found myself drawn to the amazing world of bees. 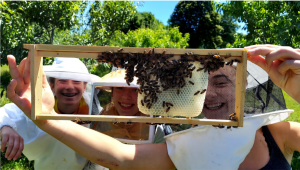 The bees start to build some fresh comb on a new frame.

I believe it was in 2019 that I told my mom that I thought I was ready to have my own hive. One that she would have to let me do all of the inspection by myself. This is where Jeff came in again. He was always reluctant to let anyone touch his bees. For those of us that knew him, he was very particular about how he wanted them raised. He believed in treatment-free hives. I had mentioned in the past that I would be willing to help and I would get a maybe. But then in Spring of 2019 something changed, I don’t know what, maybe his desire to educate overtook his protectiveness of his bees, but he agreed to let my brother and me help with the Victory Garden bees. It might have also been that it was a small struggling hive, and he figured we couldn’t make it much worse. The reason didn’t matter to us, we were just glad he was willing to take a chance on us. I think he loved the idea of kids getting involved to help improve the world we are living in. 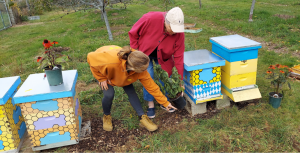 My Babcia helping me put some new plants in by the hives.

Anyway, we would check the bees, send pictures of the brood patterns and of us looking at the bees, and then report back to Jeff. We would discuss what we saw and what we thought the next course of action would be for each hive. Jeff was always super busy checking in on his other hives all over the state, so most of his mentoring was over the phone. There were a couple of visits that Jeff was going to try to meet us at the Victory Garden but he got caught up at other times. I think at this point, after all of our discussions and the pictures I was sending, Jeff was beginning to trust us with his bees. In one of our discussions, he even said with excitement, “You guys can be my crew. It’s pretty cool that I have a crew!” I would even drive by his house to pick up frames and more bee boxes at the bottom of his driveway. We worked well together.

As we began to prepare the hives for the winter, Jeff asked if I would be willing to help him with his other hives around the state. Now I was an even more official Crew member. After checking with my mom, I told him I was on board. I was so excited to be helping out with something I loved to do. I had learned so much from him already and now I would learn so much more. I had no idea that that would be the only summer that I would be part of “Jeff’s Crew”

Jeff taught me so much in such a short time. So to honor his positive energy to all

creatures great and small, with your help I have created this bee yard with educational signs, a sitting area to watch the bees, a garden for the bees to forage, and a calm, peaceful area to sit back and enjoy some quiet time.

Thank you to Miss Erin for guiding me through this process, to Miss Leslie for donating the bees and being my contact, for the Backyard Beekeepers Association for helping to make this happen, my scouts friends for helping with the work, and everyone else who has made this area possible.

Thank you all for coming to honor an amazing friend! 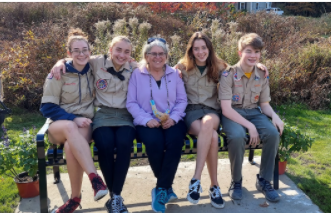 All of the Scouts dressed in their Class A uniform at the dedication. 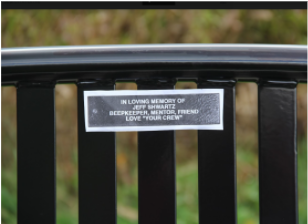 The plaque on the bench 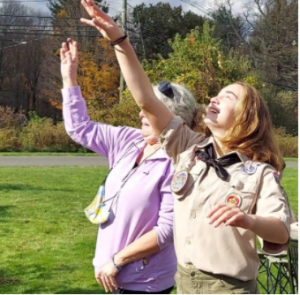 Miss Nancy and I throwing native seeds out into the meadow and Fairfield Hills. 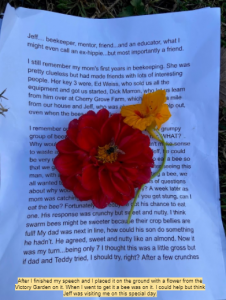 After I finished my speech and I placed it on the ground with a flower from the Victory Garden on it. When I went to get it, a bee was on it. I couldn’t help but think Jeff was visiting me on this special day.