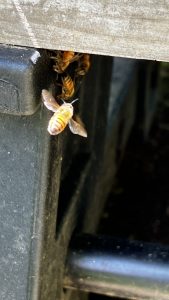 Earlier this month, Michael and I showed up to do our regular bee yard work and we found a wonderful surprise!

A swarm had moved itself into some of our empty equipment.  Earlier in the season, we had set some extra equipment on a bench.  We didn’t want anything getting into the frames that were inside and so we thought we had closed off the boxes.  They were on a hive stand and we were out of bottom boards so we’d put a queen excluder on top of a slatted rack to cover the small section of hive that hung over the edge of the bench.  Either the queen excluder had a hole or we didn’t have it lined up just right because the bees found a way in through the bottom of the hive.

We didn’t want to leave the hive outside of the bear fence but we had our eternal bee yard problem.  These bees had moved into a box of deep equipment when we are trying desperately to move everything to 8-frame medium equipment.  So we maneuvered equipment around, rigging this and that and finally scrounged enough equipment to move them into a new setup inside the bear fence.  It was only about 30 yards away from where the swarm had settled so we figured that even though it was in the middle of the day, the colony would fan and the foragers would find the new hive location.  We figured wrong. 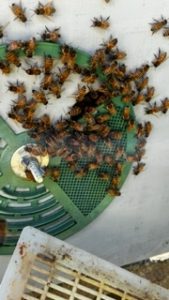 We moved the colony into the new spot inside the fence and went on about our usual work.  Awhile later, we could see all the foragers congregating in the old location.  It was very sad watching all of these confused bees wonder where their colony had gone while they were out collecting supplies.  We moved the old equipment back to its original spot, now empty of bees and all the foragers happily went back inside, only to find that the hive was empty!  The comb was there but the bees were gone.  I really thought that without a queen or larvae of any kind in the hive, these bees would move on to other hives in the yard.  However, when we returned the next week, they were still there, happily building a colony in this previously abandoned equipment. 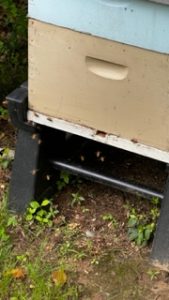 When transferring the colony, we never did find the queen.  However, we couldn’t find her in this tiny little split either.  The bees didn’t seem to mind though.  Maybe they had swarmed with a virgin queen and were confident that she was returning soon.  Just in case, we added queen cells to both hives and now we’re playing the waiting game…waiting for the day we can inspect for eggs from a newly mated queen.

The following week, we showed up at the bee yard and found another swarm in a different stack of abandoned equipment.  Here we go again! 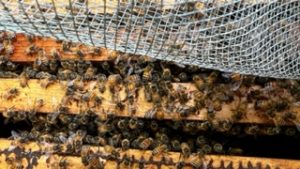