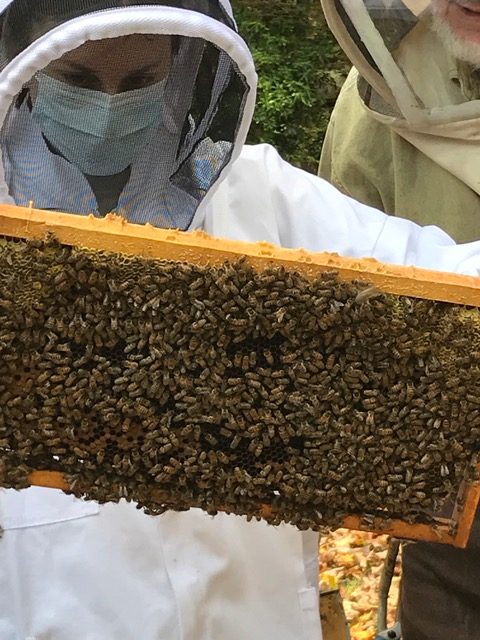 Having been a beekeeper for over 20 years and involved with numerous bee clubs, I often get calls from beekeepers who need some advice or help. I recently received an email inquiry from Liz who has a teenage daughter Lindsay and one beehive. Someone from a bee club had given them my name because we live in the same area and thought perhaps I could help them.

Lindsay, who is also a Girl Scout and high school student, started beekeeping with one nuc in July. She had been having difficulty with doing inspections and wanted help from someone with more experience. We agreed upon a time and date based on her zoom class schedule, and the forecasted temperature for the week.

I arrived at their house located on a dirt road in the middle of the forest. A bear fence surrounded the one hive. Their tools, and the smoker, along with the fuel, were neatly laid out on a bench. I had brought various pieces of equipment with me not knowing what I would find at their home apiary.

I brought my modified veil where the face screen had been replaced with clear plastic. This was an innovation that I found at an EAS meeting. My wife made the modification for me and I found it very useful when I needed to look closely into a hive for a queen or the presence of eggs. My eyes not being what they used to be, clear plastic was much better than looking through a black mesh veil. In the age of Covid, it also was a good substitute for a face mask.

We started the inspection with observation. I explained about things they could learn from watching the bees at the entrance. We talked about the possibility of pollen indicating brood rearing and the evidence of a queenright hive. As in most beekeeping practices, I used the words “sometimes, not always, usually, and maybe.” These qualifiers are often the dividing line between the art and science of beekeeping.

While doing the inspection, the techniques that I demonstrated, reminded me of the different beekeepers I have watched over the years going through a hive and how useful it was for me seeing different hives, learning different methods, and seeing different circumstances. Many of those experiences I gained through the various Bee clubs that I have participated in.

I pointed out to Liz and Lindsay, the advantage of having more than one hive, in terms of learning and the potential for exchange with multiple hive resources.

After making some general observations about what we were finding, and showing her my hive tool techniques, I asked Lindsay to proceed with the inspection and tell me what she was seeing. The hive itself was unremarkable and was about what you would expect to see in a 10 frame hive that was expanded from a nuc in July. There were adequate stores, brood, and we saw the queen.

I was pleased to hear that they had been doing mite sampling and even had applied a formic acid treatment during the summer. To me, this indicated that they were far along on the learning curve to becoming beekeepers. Most novice beekeepers don’t have the sophistication of being able to monitor for mites and treat.

During the course of my inspection with them, they continued to appreciate my help. Liz reflected on her contacts with a local club, and some of the teachers she had encountered. She said, “beekeepers tend to be very nice people”. I thought about her statement for a moment, thinking back on all of my beekeeping associates, and I responded, “you’re right, beekeepers are nice people”. Lindsay commented “It was very helpful having someone who is experienced guide me through my hive inspection. My mentor helped me find the queen, provided pointers on removing sticky frames, and helped me assess stores of honey.”

Packing up my gear, I returned to the car and found my reward, three surprise boxes of Girl Scout cookies.

I had said to them “that’s what beekeepers do, we help other beekeepers.” That statement really summed up the morning that I had spent with them. I find it very enjoyable to be able to pass on my knowledge about beekeeping to others, especially when they are young people who share in the excitement of learning about honeybees.