Words From Our President – March 2021 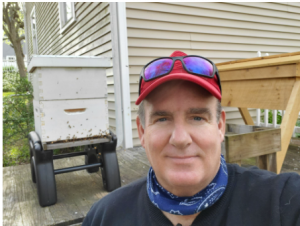 Hello Fellow Beekeepers,
It’s March Madness Time and I’m not talking about college basketball, but rather all that we have to do now to get ready for the coming beekeeping season.
60 degree days, wind chill at nights sometimes down to the single digits…it’s all a bit confusing to us. Imagine what the signaling is to our beloved honeybees. Let’s cluster, let’s forage, let’s consume our honey stores. Yikes!
This is the time we raise our awareness, as it often is the most delicate time of year for the overwintering survival of our hives. You may have already seen your bees flying on the warmer days, but that doesn’t guarantee that they will make it to May or June.
If you haven’t seen them fly, it doesn’t mean that they haven’t survived either. You may just have to catch them at the right time on a different day. Your best bet is to open your hive on a warmer day and do a quick check.
Most assuredly you will probably need to make certain there are emergency rations in your hive. Fondant is still ok and then switching over to light syrup feeding when we have more consistently warm days is a must for most of us.
It is likely that by now your queens have started to lay eggs. You can feed pollen substitute now and continue to do so until you see a steady flow of pollen coming in regularly. Some beekeepers have already seen pollen coming in since early March. Of course, every apiary location has its own distinguishing characteristics and proximity to available foraging sources.
We have mentioned it before, but it’s worth stating again. If you need bees, you may still have a chance of getting a later in the season package, but you need to jump on that now. Also, order nucs from your supplier, if you need them as most orders, have been placed and inventory is low.

If you are getting new packages of hives, and you have frames of comb left from the previous year, you may want to introduce the new packages into a mix of new foundation and comb rather than just all new frames of foundation. There is, however, an upside and a downside of using the existing comb in your new colony.

Using both new foundation and existing comb in your new colony will allow your bees to start building new comb on the foundation while also being able to bring in pollen and nectar to be placed on existing comb. There will also be plenty of open cells for your queen to immediately start laying.
The downside of utilizing comb from a different hive and using it in a new one is that you could introduce any variety of problems into this new hive. Before doing so you should place your pre-existing used comb in a freezer for a few days first. This is a precautionary method and a good practice that could prevent larger issues later in the season. For the record, I have used both in preparing new packages on numerous occasions and have never had any problems doing so.
Enjoy your beekeeping this year and be grateful, as I am, that we all have the opportunity to be part of such a wonderful hobby. Share your knowledge when you can. I have found that many people are interested in beekeeping and all it takes is someone to introduce the idea and all of a sudden, you have a new person taking up the hobby. And it happened because of you!
So let’s get going and have a great Spring!
Rick Glover
President
March 2021